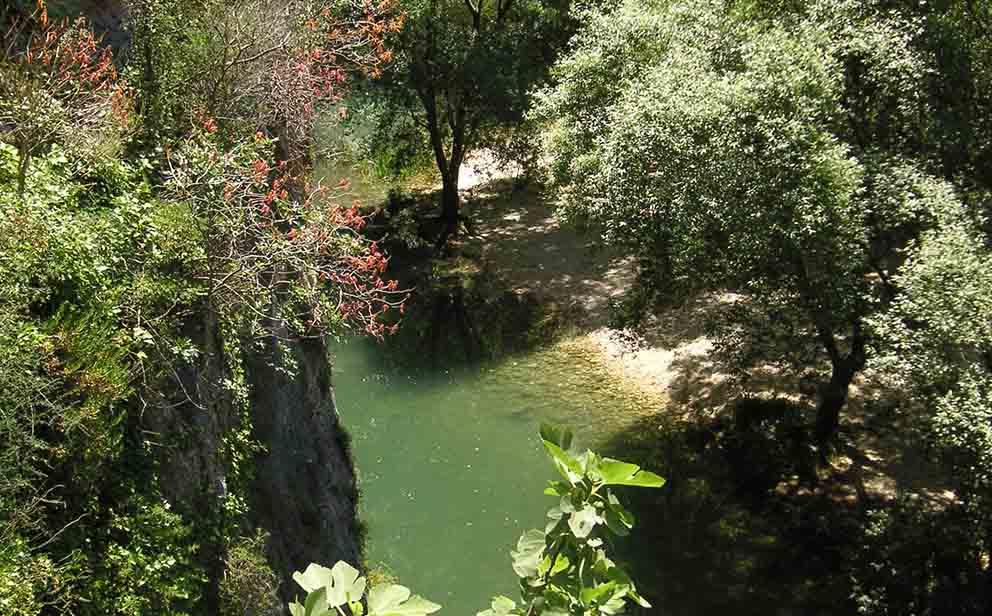 The rocky necropolis of Pantalica is one of the most impressive Unesco's world heritage. sites in Sicily but also one of the most difficult to reach. It's a prehistoric archaeological site, belonging to the late bronze age (13th - 8th century B.C.) and it contains a huge rocky cemetery consisting of thousand of graves digged in the walls of the Anapo canyon.The tombs are overhanging the Anapo valley. Pantalica is worthy a visit also for it's wild natural panoramas. The whole area is inside the Anapo valley nature reserve, a paradise for trekking and hiking with a lot of different pathways. Pantalica is the plateau over the canyons formed by the creeks Anapo, Bottigliera and Calcinara. This small rivers have digged impressive rocky walls: a great panorama but also a good defended position for the ancient populations of Sicily.

It's possible to arrive to Pantalica from two different ways: from the little village Ferla or from Sortino. Both villages are in the province of Syracuse, in southeastern Sicily. If you have only few hours to visit Pantalica, we suggest to arrive there through Ferla because the way arrives nearby the main archaeological ruins. The pathway departing from Sortino is very beautiful but a long walk is necessary to arrive e.g. near the anaktoron, the "palace of the prince". The way to Pantalica is interesting and very panoramical but pay attention to the many curves and take care that you have to drive about 1 hour and more from Syracuse.

Pantalica is an Unesco site but sadly there's not a great organization for visitors. You can find postcards or to drink or eat in Ferla or Sortino or in the Agriturismo restaurants near Pantalica. What are the main monuments of Pantalica? The site is famous for its rocky necropolis. The prehistoric tombs are digged around the walls of the plateau, sometimes in impressive locations. Some of them can be reached by foot. The tombs look like little regular, artificial caves with one or more rooms. The many finds (pottery, bronze tools, bones) are exhibited in the sector "A" of the archaeological museum "Paolo Orsi" of Syracuse. In the highest point of the plateau are also the ruins of the anaktoron. Probably it was the palace of the chief of Pantalica or a religious building. The megalithic rocks are impressive and remember the ancient Mycenean constructions in Greece.

In Pantalica it's also possible to see medieval ruins, e.g. some rocky oratories of byzantine age. The best season to visit Pantalica is spring due to the mild temperatures and to the incredible colors of the Sicilian countryside. In summer it is very hot and there are very few shadow spots so we suggest to visit the area only soon in the morning or before sunset.